Fear of fire has created an opportunity for the animal agriculture industry to manipulate our fear for their gain.  In the rush to find a solution we accept whatever we hear first.  We hear what is the most heavily marketed...
Below are some wake up calls regarding the idea the fire suppression is our savior...
Grazing and Fire Suppression by Dr. George Wuerthner (Click to read full article)

First the savior, now the villain: Fire suppression is often overhyped in the American west
​(Click to read full article)

Backcountry thinning projects do not protect homes or forests
By Dominick A. DellaSala and Luke Ruediger

A recent story published by Grist and reprinted by Ashland.news claims that Ashland is saving itself from fires through forest treatments in the Ashland Forest Resiliency Project (AFR). This rosy prediction is both naïve and self-serving.
To start, the treatments in the Ashland watershed have not been tested by wildfire to confirm presumed benefits, and in some locations, bark beetle mortality is still occurring in stands treated during the AFR Project, including old-growth ponderosa pine that died in the Ashland Research Natural Area along the Lamb Mine Trail following treatment.
Dominick DellaSalaContrary to amped-up fire-risk reduction claims made by federal land managers, The Nature Conservancy, and others promoting “forest health” thinning, such logging is relatively ineffective during active fire weather and extreme fire events. Extreme fires like the Almeda and Bootleg fires were fueled by climate change caused by carbon emissions tied to fossil fuels, logging, and other human causes. Despite claims made that thinning can slow such fires, extreme fire weather is what mostly drives them.
Presumed forest health and reduced fire severity associated with thinning are overhyped by organizations, special interest groups and industries with direct financial interests in federal lands logging, and by politicians promoting logging-related snake oil as fire-risk reduction. This, in turn, creates a false sense of security in communities that continue to sprawl dangerously into fire-prone areas, and to build back after fire with the same flammable structures.
Backcountry thinning and vegetation removal have little influence on home ignitions. The $28 million dollars spent to theoretically protect Ashland from wildfire in the AFR Project will not protect homes or reduce the severity of fires during severe fire weather. Home destruction from the Almeda Fire had nothing to do with forests or a lack of thinning.
Luke RuedigerBackcountry thinning often impacts old forests that can instead act as natural climate solutions, storing massive amounts of carbon in older trees, soils, and foliage. Older forests are the most fire-resistant portions of our landscape. A century of heavy industrial logging has transformed mature, fire-resistant trees into fire-bomb plantations lacking the large tree structure and closed forest conditions that support natural fire resistance. Anyone that thinks that logging is no longer a threat need only to fly over the vast sea of clearcuts primed to burn.
The single largest study of wildfire effects across the West demonstrates that heavily logged and extensively managed forests burn at higher severity than their less intensively managed counterparts in Roadless Areas, Wilderness Areas, National Monuments, National Parks and other protected areas. Similar results were demonstrated right here in southern Oregon. The Oregon Global Warming Commission and top researchers also have confirmed that the wood products industry emits far more carbon to the atmosphere than even the largest wildfires, thereby making the fire problem even worse.
Each dollar spent thinning backcountry forests takes emphasis away from the greater need to reduce home ignition risks within 100 feet of homes. Even the best thinning projects have about a 1% chance of encountering a fire. Instead of investing millions of taxpayer dollars in needle-in-haystack chances, protecting Ashland, or anywhere else from the kind of tragic losses we saw in the Almeda Fire, requires a more pronounced emphasis on home hardening and reduction of flammable vegetation nearest homes. Far more emphasis on evacuation planning, community fire safety, and surgically placed defensible space thinning is where the money should be spent.
Let’s be honest, thinning projects do not protect homes or forests from increasing climate-related fire effects. Instead, we must solve for the root causes. This means getting off fossil fuels, storing more carbon in natural ecosystems by protecting them from logging, putting an end to fire-bomb, clearcut logging practices and openly discussing the limitations of thinning in a rapidly changing climate, instead of casting aside those that legitimately question the hyperbola.
Like the pandemic, we must learn to adapt to more fire in our lives by preparing for it where the risks are greatest — around homes and communities — and not by overhyping questionable projects that in the end will not make us safer from wildfires or climate change.
Dominick A. DellaSala, Ph.D., Chief Scientist, Wild Heritage, opined about the root causes of the Almeda Fire, and is an award-winning scientist with over 250 peer-reviewed articles and books on forest management and climate change. Luke Ruediger lives in the Applegate Valley, has implemented defensible space treatments for over 20 years, and is currently the Executive Director for Applegate Neighborhood Network and Conservation Director for Klamath Forest Alliance.

George Wuerthner on restoring a forest in altered climate

​Look at this graph and you will see the majority of the past couple of hundred years has been cool and moist. This is the period of "successful fire suppression". When climate is cool and moist Nature does a good job of "suppressing" fires.  However, it is also the "reference" point for Forest Service policy. I.e. we want to "restore" the forest to its "historic" condition. Vegetation is not any more static than the climate. Vegetation follows climate. And if the climate is different, you will not get the same vegetation. Now it is drier and hotter. Drier and hotter climate favors more large fires.

So when the FS, BLM, TNC, tribes or anyone else says the solution to large wildfires is to do prescribed burns or thinning to "restore" the forest to its "historic" condition, keep in mind that we can't do that because the historic conditions no longer exist. We are in a new era, similar to the Medieval Warm Spell, which, we know from charcoal and other records, was a period of major wildfire activity. For instance, during this period, much of the western slope of the Sierra Nevada was burning--sound familiar? 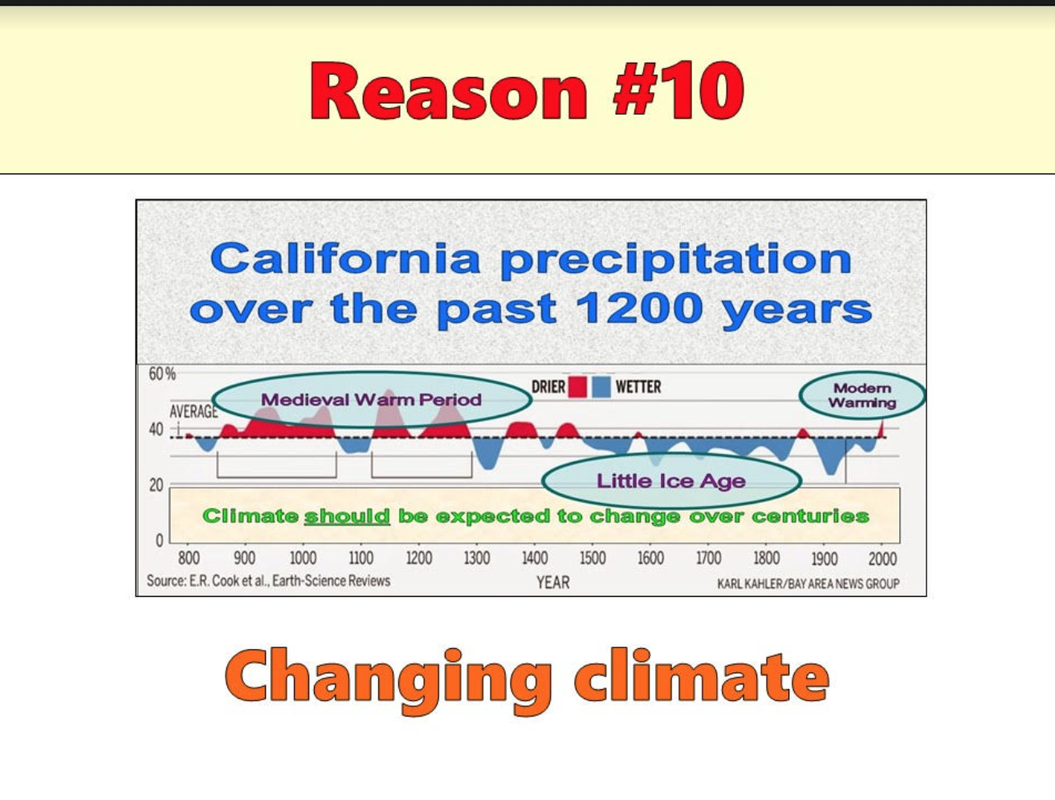