PRNS: A History of Ignoring the Public
One such example is the Responsive Management Survey which overwhelmingly showed that those surveyed ranked the ranches LAST on what they wanted in the park while wildlife preservation ranked FIRST.  Download the document yourself on ​this page.
PRNS's own coastal watershed assessment (read and download here) contains some of the harshest results regarding the effects of ranching you can imagine, but despite this, ranching in Point Reyes National Seashore not only continues to be more abusive than ranching outside the seashore, but the ranchers are being rewarded for this abuse with expanded ranching.  What was the point of the assessment if it's going to be ignored.  When existing studies already show shocking amounts of harm inflicted on the seashore how can any form of expansion of the same activities causing that harm be considered a "balanced approach" moving forward?

Both the raven study of 1999 and the silage mowing study of 2015 are examples of the park service receiving recommendations to change or reduce ranching activity due to their negative impacts, and yet, from what is taking place in the park, the staff might as well have used these studies as toilet paper.

Rather than a staff dedicated to protecting our public park these people seem ready to be promoted to positions in the Trump Administration's Environmental Protection Agency. 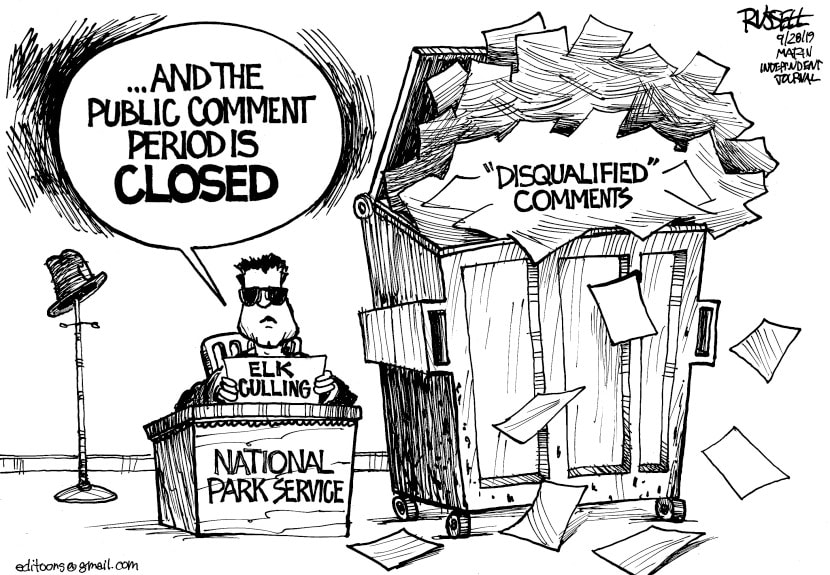 Need more convincing?  Sadly, there's plenty more to see.
And yet, after 20 years, rather than being in practice, these recommendations continue to be little more than lip service.

​Documents obtained through the freedom of information act show that even concerned citizens wrote in encouraging the park service to take action.
Reasonably, at this stage one might be asking why a park service insists on not enforcing wildlife friendly practices.

Indeed, why, of all places, is a national seashore failing to replace the problematic, tall, barbed wire fences with wildlife friendly fences, which would be better for both ranchers and the animals?
Why is the seashore covered with open feeding troughs which have been proven to feed non native birds, which then push out native species of birds.

Why are the ranchers still mowing down spring babies just as they are entering the world during their annual silage harvest despite studies proving this to be a problem to population levels of native birds.  Analyzing the statistics of the bird populations following the silage mowing is one thing, but let’s not forget the raw and horrific fact that nesting animals are being chopped up in mower blades. And it’s not just birds, it’s any young animal burrowing or taking refuge in these fields. And the fact that the ranchers mow from the outside in, which is the exact opposite of the published recommendations, even adult animals can find themselves trapped.
​
But let’s not forget that the number one threat to the snowy plover is the growing population of common ravens, which prey upon and raid the nest of the plovers.  It is indisputable that the ranching activity is the number one promoter of these raven populations. But hey, don’t let that stop you from appreciating that the park service puts up signs regarding nesting season of the snowy plover.
​#pointreyes #pointreyesnationalseashore #shameofpointreyes #cattle #dairy #ranching #corruption #jaredhuffman #wildlife #Bigag #tuleelk #california #californiaburning #invasive #agriculture #grazing #livestock #native #invasive #agriculture #poop #manure #cicelymuldoon #trump #trumpsters #climatedeniers #marin #marincountry #realityofmarin #slaveowners #marinindependentjournal