How many lies can "honest, hard-working Americans" fit on one page?
The Point Reyes Ranchers Association website might hold the record, but it's an unofficial record.  Let's go through it.
A page that pulls at the heartstrings of readers and attempts to guilt them with lines such as "anyone who respects traditional family farming" sure is comfortable lying to that same audience.  I wanted this to be a short post, but the number of deceptions on a single page is overwhelming.  Heck, before we can even get to the lies contained in the text let's consider the deception of the images used on the page.

Image 1. The baby cow next to its mother.
​
Maybe the association could write a country song to go along with their website, called, "Where is my mom, where are my babies?"
Image 2.  The little milk jug next to a free standing cow.
Image 3:  Even the family is a lie
The image of a family on the left does not represent what takes place in Point Reyes.  These are big businesses with contractors and employees working the land for them.  Many of the families bought land and businesses outside the seashore and keep their seashore ranches as supplemental income.  Why not? They are getting the ranches almost for free (at the taxpayers' expense)
Image 4: The pretty background isn't ranch land
The hills seen in the background of the association page do not represent grazed land.  This actually represents what the hills can look like if the ranches are removed, much like the hills within the elk reserve where the damage of grazing isn't allowed.  Below is what ranched land in Point Reyes National Seashore looks like.
OK, so we can finally get to the textual lies...
A proud partnership...that didn't exist.
Right out of the gates comes the claim that the ranchers were proud to have partnered with the seashore.  The reality is that they opposed the creation of the seashore so adamantly that eventually the deal was sweetened to not only give the ranchers millions of dollars for their land, but to let them lease it back for specified amounts of time.  Even this was unacceptable by the ranchers as is revealed in the Congressional testimony.  Yes! Even receiving money for the land then getting to stay on the land was rejected! This link will take you to 188 pages of testimony in which the ranchers fought the seashore.  If it weren't so sad it would be comical reading the different excuses used to dissuade the purchase of the seashore.  "It isn't even special coastline." "It's too dangerous, people will drown." "Only a few people will use it." You will destroy the dairy industry and the local economy."  "We provide badly needed food".  Perhaps the funniest one was the claim that cars going by would stop the cows from being able to eat and rest.
Several of the excuses above are still being used today.  If history is our teacher then the lesson is that their excuses from 1961 were not true and are still not true today.

​Attack of the Special Interest Groups
Paragraph two refers to Western Watersheds, Center for Biological Diversity, and Resource Renewal Institute as special interest groups that interfered with the NEPA process.  The reality is these organizations had to sue in order for the park to do its duties, i.e., to conduct environmental impact statements and pursue an updated land management plan.  Why the park service, tasked with protecting and preserving a national seashore failed to conduct basic tasks is one of conjecture, but what is clear is that by not doing these things the ranchers were allowed to wreak havoc on the land without consequences.
The paragraph says "we as individuals" intervened.  Well, the reality is that the county of Marin fit the bill for the lawsuit, which means taxpayers fit the bill for the ranchers, as it turns out is fairly typical in the western world of welfare ranching.
So, when the writing was on the wall, one last disgusting attempt was made to avoid any repercussions of the EIS, this came in the form of ranching-supporting Congressman Jared Huffman trying to push through a rushed bill that would give the ranchers 20 year leases and make them impervious to any discoveries made during the EIS process.
The special interest group here is the ranching community, complete with their lobbyists, politicians, and lies.  They destroy public land for profit while calling environmental groups who try to bring truth to the topic the bad guys.


Millionaires Providing Habitat
In paragraph 4, Dave Evans, whose operations brought in 12 million dollars in just one year (see the SF Chronicle article) claims his ranches provide habitat for native species.  The reality is these ranches were built on top of native habitat and hardly anything native remains in the ranched areas.  The fact that some frogs manage to survive in his cattle's poop ponds doesn't make Dave a good guy.  This is so ridiculous it deserved its own video, found here. (Just scroll down to the wildlife habitat video.)
That paragraph ends with "thereby confirming the critical role that ranching plays in maintaining our thriving and beautiful working landscape.”  People, go use your eyes.  If you don't like to read just drive to the seashore and look.  But if you are willing to read, numerous studies, some of which were even sanctioned by the seashore, layout never ending lists of consequences the land, water, plants, and animals suffer as a result of the ranching operations.  The reality of the impacts of ranching are so far from anything positive that one has to wonder if the ranchers live in a dream world where they believe their own BS or are fully aware and just want to make as much money as they can while they can.


Economic and Cultural Importance
Paragraph 5 echoes the same foolishness as the excuses of the 1960s.  If the claims of the ranchers had been true back then, Marin county would be in ruins and the dairies wouldn't exist.  Instead, Marin is still dominated by ranching and the local economy benefits from nearly $200 million dollars in tourist spending annually.  The locals should be on their knees today thanking the government that they didn't listen to the BS of the ranchers in the 60s and praying that seashore doesn't get handed over to these private profiteers.


Salazar and Promises
Paragraphs 6 and 7 are basically more complaining about the ongoing length of leases for ranchers whose leases already all expired.  They cling to Salazar's statement of recommending the pursuing of 20 year leases, which was inspired by seeing that the oyster company was shut down after its environmental impacts were revealed.  A recommendation is not an obligation, an order, a command, nor is it a promise and even if it was any of those it would STILL be at the discretion of the Park Service who are required to act in a manner that does not hinder the natural habitat.  Unfortunately, the park service has shown to be under immense pressure to bow to the ranchers and politicians.  Our national seashore has suffered and continues to suffer because of this.


Regurgitating the Lies
Paragraph 8 echoes the earlier topic of pretending to have been integral to the creation of the seashore.  This, as has already been shown, is a flat out lie.  Nor do the ranchers "work with the park" as is shown in the FOIA documents containing endless lease violations and uncooperative behavior by the ranchers.  It is repulsively offensive every time I read the "environmental" contributions the ranchers make to the seashore.  When their ancestors arrived they quickly began the process of destroying the native habitat to convert it to ranching, including getting rid of native plants and animals.  To this day the ranchers commit atrocities against the land and wildlife.  This has been documented in the film "The Shame of Point Reyes".  Everything in the film captured on camera that seems too terrible to believe has been backed up with published reports and studies.
Just in case this association tries to change what they said, below are screenshots of the website as it appeared September 17th, 2019. 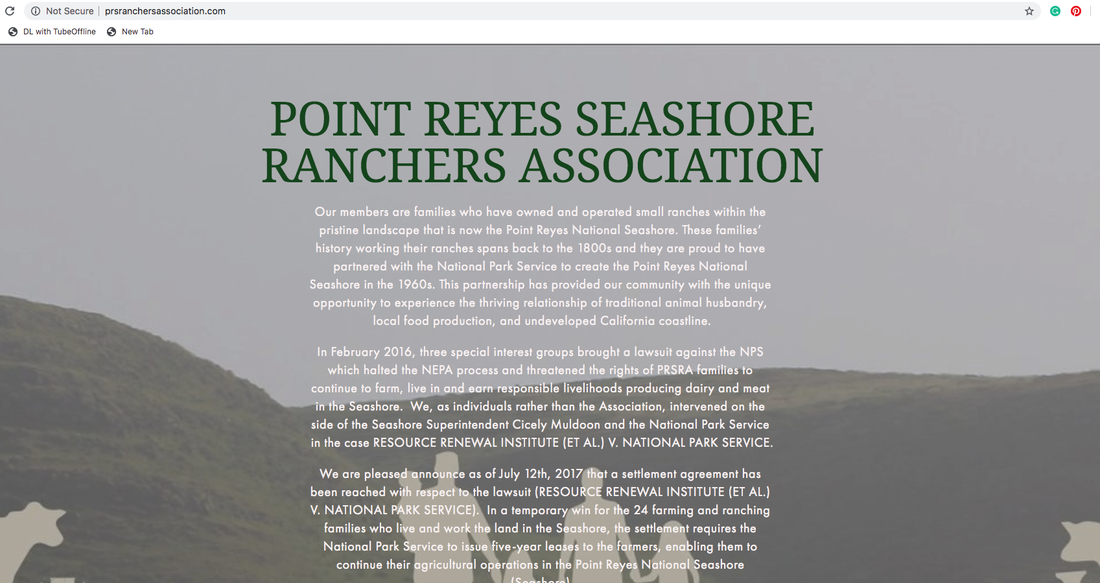 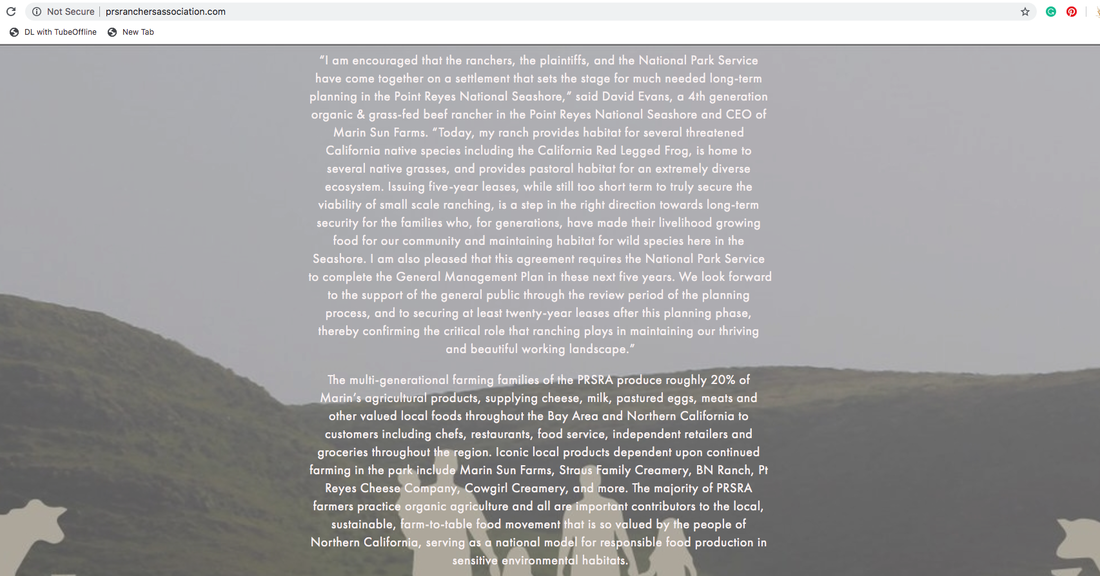 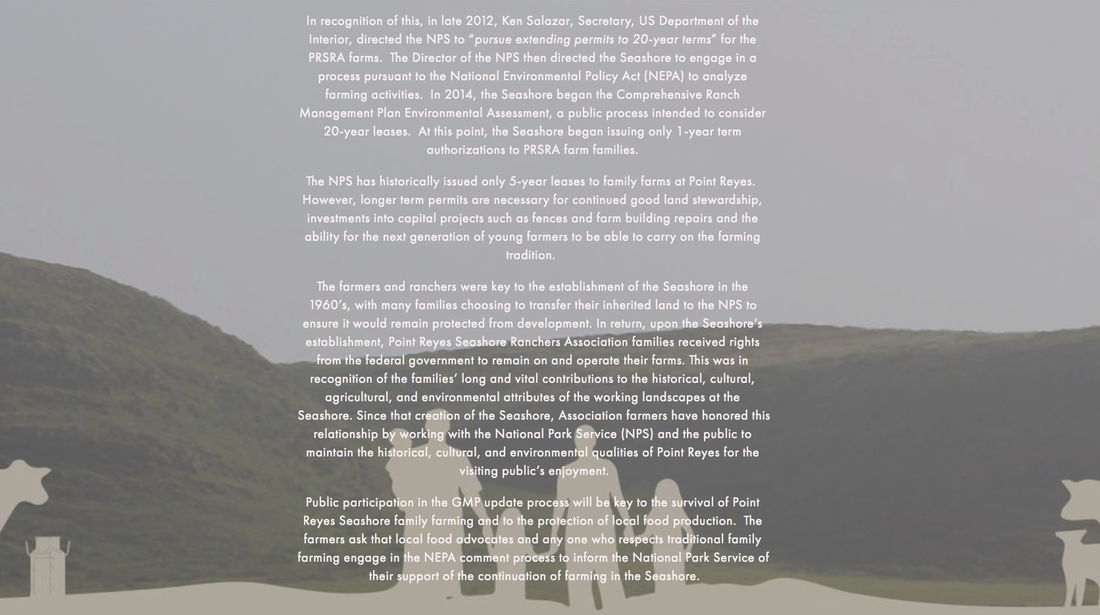